Abstrak
Abstract: Global warming, or what has been called the Greenhouse effect, refers to an average increase in the earth's temperature, which in turn causes changes in climate. The Greenhouse Effect is the results from a four step process. First, sunlight radiates from the sun, through space to earth's atmosphere. Second, the sunlight enters the atmosphere and hits earth. Some of it turns into heat energy in the form of infrared light. The heat is absorbed by surrounding air and land, which in turn makes it warm. Third, infrared rays, which are remitted into the atmosphere, are trapped by greenhouse gases. The gas absorbs the light and is remitted back to the earth's surface and warms it even more. Greenhouse gases primarily carbon dioxide, methane, and nitrous oxide. Global warming caused by greenhouse effect, feedback effect and solar cycle variations. Global warming caused by climate changes and extreme weather events, rising sea levels, increasing of precipitation are likely to have detrimental effects on human health that accompany malnutrition. The objective of this study is to give information about global warming, and how to change people attitude toward environment by conservation, efficiency of energy, reduction of energy, and educational approach. Keyword; global warming, greenhouse effect
Penerbit
Jurnal SAINTEK UNG
Kontributor
-
Terbit
2009
Tipe Material
ARTIKEL
Right
-
Berkas ini telah didownload sebanyak 339109 kali
Download 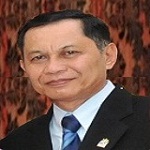